Mirroring the Modesty of God 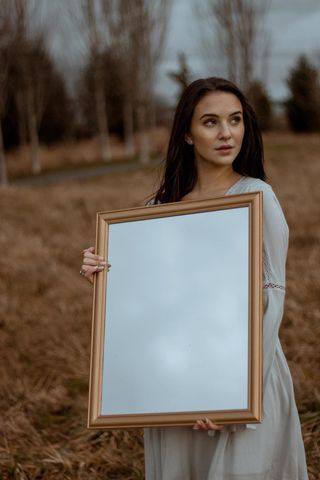 And we all, with unveiled face, beholding the glory of the Lord, are being transformed into the same image from one degree of glory to another. For this comes from the Lord who is the Spirit.

This may come as a surprise to you, but we are all schmucks (sinners) in need of a Savior. Some of our demeanors may be frightening to people but that all could be rectified if we spend a little more time with the Father. Now wouldn’t you agree, as Christians we are to be image bearers of Christ? If not us, then who? We should be reflecting God’s image in all our ways. When we know who we are in Christ, we will live to please Him and consider everything we do testing it with the Word of God.

“For if anyone is a hearer of the word and not a doer, he is like a man who looks at his natural face in a mirror; for once he has looked at himself and gone away, he has immediately forgotten what kind of person he was. But one who looks intently at the perfect law, the law of liberty, and abides by it, not having become a forgetful hearer but an effectual doer, this man will be blessed in what he does.” James 1:23-25

Let’s face it, social media is creating a new addiction, ATTENTION. People will do or say most anything to garner just a little more attention. And in an over-sexualized culture, immodesty is everywhere. The mirror is elevated from a tool of self-evaluation to an instrument of self-expression, with many making “look at me” selfies in scanty clothing.

A few years ago, after my faith-based fitness show made its debut on national television, a woman emailed about my show. She was upset with me and explained how disappointed she was in my appearance, and how I dressed much like the world! It shocked me. Was it appropriate, modest? I reflected on my attire. It was quite modest when comparing it to the fitness world which is showing lots of skin and leaving little to the imagination.

Everyone has their own idea of modesty. When my show was being considered for a network which airs in highly restrictive Muslim countries, they were delighted that my show reflected their conservative values in clothing. They appreciated the modesty and my approach to fitness. Isn’t it funny how everyone perceives things differently?

Modesty is more than clothing, or lack thereof, it is an attitude of the heart and a reflection of who we are in Christ. Paul, in his letter to Timothy, heralds how a woman should present herself to the world. She should be “modest or respectable”. He uses the Greek word kosmios which denotes orderliness and propriety. Paul adds about men that they should be respectable, while some versions say, of good behavior. If as Christians we have truly died to self, I would believe modesty would offer a humble attitude, and doing everything to the glory of God. Everything! This would once again require testing everything for God’s approval; What I am doing, wearing, reading, watching, listening to, talking about, eating, and drinking?

The human body is beautiful, our Creator made it beautiful, no argument here. The Word of God said we are “fearfully and wonderfully made.” The Word also says, “God made man and woman in His own image,” period. Male and female, nothing more, nothing less. You can bark like a dog, meow like a cat, dress like a woman, dress like a man, or honk like a 2002 Honda, but that will not make you one. That is not the point of this column, but as Christians, we can easily get swept up in the cultural changes trying to fit in, when we should be standing up for our Lord with His Word in love.

Sadly, it seems as though the enemy has convinced many Christians, and church leaders, they are Moses, and unable to speak. The truth may come across as mean spirited or offensive. Instead of fearfully made we have just become fearful. The Bible, God’s Holy Word, is good for encouragement, instruction, and rebuke. All three of those should be spoken in love. A rebuke spoken before catastrophe becomes a warning preventing disaster. Such as, “Honey, if you dive into the deep end wearing that teeny weeny bikini you will have a big problem.”

Seems like the enemy has been tripping us up since the beginning. Remember this? “You won’t die!” The serpent replied to the women. “God knows that your eyes will be opened as soon as you eat it, and you will be like God, knowing both good and evil.” The woman was convinced. She saw that the tree was beautiful, and its fruit looked delicious, and she wanted the wisdom it would give her. So, she took some of the fruit and ate it. Then she gave some to her husband, who was with her, and he ate it, too. At that moment their eyes were opened, and they suddenly felt shame at their nakedness. So, they sewed fig leaves together to cover themselves. Genesis 3:4-7

God must have thought the fig leaves were not modest enough to cover their naked bodies, so He designed the first Haute Couture outfits on the planet.

“And the Lord God made clothing from animal skins for Adam and his wife.” Genesis 3:21.

So, the question remains; Does our mirror reflect Jesus or the world?

Jeremy Taylor said, “Modesty is the appendage of sobriety, and is to chastity, to temperance, and to humility as the fringes are to a garment.”