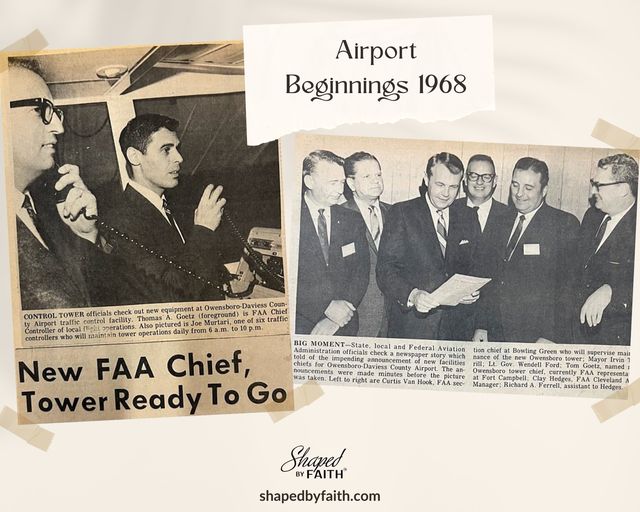 It is the same with my word.

I send it out, and it always produces fruit.

It will accomplish all I want it to,

And it will prosper everywhere I send it.

My father, Thomas A. Goetz, was the chief air traffic controller at the Owensboro Regional Airport from the control towers’ opening in 1968 till his retirement in 1993. He moved our family to Owensboro to open the control tower. He was very involved with bringing the first air shows featuring the Blue Angels, US Air Force Thunder Birds, instrumental in bringing the first hydro fair regatta to our area, along with several other community events. He was a Navy veteran of WW2, having served on Imo Jima and Okinawa.

He was also president of the Ayer Flying Club, loved his position as an air traffic controller, and diligently respected his leadership role in the community. I can still see him sitting in his chair, pipe in one hand, while communicating with a pilot on the handheld radio in the other. My father was a visionary and did not seek fame or fortune for himself. He wanted his community to prosper and knew the airport was the launching pad for greater things to come.

Where there is no revelation, people cast off restraint; but blessed is the one who heeds wisdom’s instruction. Proverbs 29:18

My father welcomed us to visit him at work, and those are some of my fondest memories from childhood. Climbing the spiral staircase, circling to the aroma of his sweet pipe tobacco, while listening to his calming voice giving directions to the pilots, he brought us all in for a soft landing. We watched him see planes on radar and listen to him start communicating with the pilots, giving them step by step instruction about altitude and how to fly into the airport. His calm confident voice soothed anxious pilots flying into Owensboro for the first time.

Listen to advice and accept instruction, that you may gain wisdom in the future. Proverbs 19:20

There were a few times when my father was called in late at night to assist with emergency landings, and while I can’t remember the specific details, they all landed safely. There were no crash landings on my father’s watch at the tower! Some of his most exciting landings were those planes carrying celebrity entertainers to perform at the Executive Inn. Those were the days!

We may not be celebrities, air traffic controllers, or worked at the Executive Inn, but we all have a sphere of influence. People you work with, socialize with, or see on a regular basis, they all deserve the opportunity to hear what God has done for you. Share the story of where you were when you met Jesus for the first time. You can’t go wrong bragging on God, speaking His words, and allowing His plan to take flight.

I think sometimes we believe ourselves independent and in control. We busily fill the gas tank, seat the passengers, fly the plane, and run the air traffic control tower, with God as our co-pilot, not the pilot. Then when lightning knocks out one of our engines and chaos ensues, we decide we need God to save us from ourselves. Mayday, mayday, God help! Now!

When we are young, we are overly concerned about ourselves, and miss the opportunity to learn from those who are older and wiser. In a twinkling we become adults and naturally become consumed with our own children, and the things of that life. Cherishing time we have with wiser and more experienced family members gets placed in the hanger for holidays, birthdays, and funerals, missing out on bountiful blessings.

My children know my father from old photographs, personal memorabilia, and the limited memories with him when they were young. That’s probably true for a lot of grandchildren. I just wish I would have spent more time asking my father about his life, career, and important memories in his life. I also wish he could have stayed around longer so the children could have spent more time with him. They adored each other.

My father, who was also a pilot, loved to say, “Clear blue and 22!” This means clear skies with 22,000-foot ceilings, 22-mile visibility. Even with this so-called perfect sky, pilots still look for a place to “crash land” if necessary. But if you really KNOW God, you still simply enjoy the day. God knows our timing, and when he calls us home, it’s time to take flight and fly high!

Have you never heard?

Have you never understood?

The LORD is the everlasting God,

The creator of all the earth.

He never grows weak or weary.

No one can measure the depths of his understanding.

He gives power to the weak

And strength to the powerless.

Even youths will become weak and tired,

And young men will fall in exhaustion.

But those who trust in the LORD will find new strength.

They will run and not grow weary.

They will walk and not faint.

My father was a peaceful, calm man, and his job suited him well. Under extreme pressure my father seemed to soar. I rarely saw him upset, except when I skipped school and painted the red front door baby blue. That didn’t go well.

But God has a provision for regrets, mistakes, and sin. We all mess up, and because of our decisions, we are frequently the cause of our own crash landings. When we KNOW Him, not just have knowledge of Him, He is quick to forgive. His Word says in 1 John 1:9, “If we confess our sins, he is faithful and just to forgive us our sins and to cleanse us from all unrighteousness.”