Do you not see this new thing God is doing? 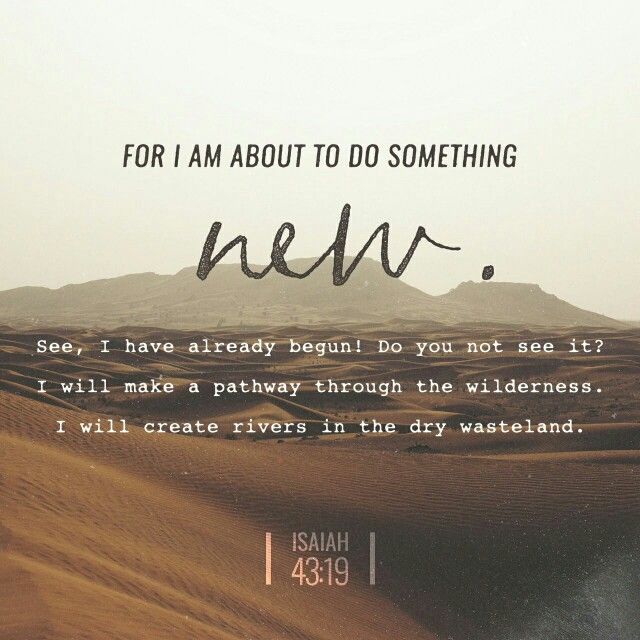 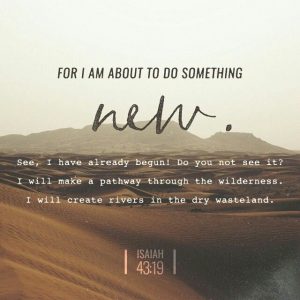 Things were looking up for the children of Israel. God gave the people of Israel a leader and prophet, Moses, and he led the Israelite’s out of Egypt and out of four hundred years of captivity as slaves. God used Moses to part the Red Sea, and escape the army of Pharaoh. When the people were hungry God gave them their daily bread sending Manna from heaven. When they were thirsty He provided water from a rock.  God provided for their every need, including, the rule book for living life in freedom, the Ten Commandments.

They must have been rubbing their eyes in wonder as they witnessed miracle after miracle. God told His people over and over, “If you follow my rules there is a promised land in your future, a land flowing with milk and honey.” God told them the key strategies for reaching their destiny and warned them to not to veer off course. God promised them a new land, a fresh new start, complete freedom and truly, the best of God’s best. Can you imagine seeing all those signs, wonders, and miracles, and still not obeying God?

I know it must have been the sun. It was probably very bright and blinded them. Or maybe, there was heavy pollen, and allergies distorted their vision and kept from seeing God’s plan. The fact is they turned down God’s plan for their old way of living. It is possible they believed that since God had brought them out of Egypt; there was no way He would take their blessings away. Sounds like they were spoiled rotten entitled brats and nothing at all like us.

The Israelite’s walked blindly around the same mountain, over and over again, for forty years. God was allowing time to purify His people, a generation dying off one by one. The people’s disobedience kept them wandering, with the Promised Land, and their destiny, just across the river, on the other side of their sin. While they had escaped slavery in Egypt, they returned to their old ways as slaves to sin.

There are too many people, Christians and non-Christians, walking around carrying a load of loneliness, while feeling disregarded, depressed, and disconnected, from their purpose and destiny. If you doubt my statement consider these statistics. On average, 34,598 people commit suicide in America each year. In comparison, we commit 18,361 homicides. One in six Americans are taking antidepressants, and in England they have seen their antidepressant numbers increase 108.5% over the last ten years. Are we circling the mountain on a wilderness journey?

While there are many with genuine illnesses, there are a great number of people simply lost in the wilderness, circling the mountain. Oh, they still function, and appear normal on the outside. Many can be quite productive on the job, appearing to enjoy their families and life. But in many cases, if the truth be told, they carry a heavy load wondering if this is all there is to life? They continue circling, validating themselves with all kinds of entertaining things, always searching, but never quite satisfying the longing in their soul.

Some sincerely cry out to God for direction, and when he sends the answer, they are too busy looking for their purpose to see what He is trying to show them. They just settle back into what they have always known and do it over and over again. The key to unlocking their purpose may be an arm’s length away, but they are in a fog that keeps them from seeing it.

Others use striving, working, or earning, as a strategy for purpose. They try different things, and go to different places, looking for God to give them clues about their earthly journey. Friends, these are terrible snares set by the father of lies and designed to keep you blind and burdened in sin.

What they must recognize is that God has been sending different people into their path to put them back on His path. The issue may be that these individuals have been spending far too much time focusing on themselves, and much too little time focusing on Him. He has sent Godly messengers to show them why they are here and who they are in Christ. God is waiting for each person to turn away from the sin in their life. He is waiting for them to turn everything over to Him.

How do I know that God has a plan for you? His Word promises in Jeremiah 29:11, “For I know the plans I have for you,” says the Lord. “They are plans for good and not for disaster, to give you a future and a hope.” But sin is sin, and we must lay our lives humbly before the Lord. When we ask forgiveness, He is quick to forgive. So, do we idolize our children, grandchildren, celebrities, money, material things, or our jobs? Do we use God’s name as a curse? Do we talk bad about the actions or situations of others and call it concern? Do we take our company copy paper or pens home as our own? It doesn’t matter what you or I think about these sorts of things, the question is, what does God say about them? And, is it hindering my purpose?

James 4:8 says, “Draw close to God and He will draw close to you…” He will never force Himself upon you, it is your choice. Look for His messengers on your daily walk; they are the iron that sharpens iron! God places strategic, key people in our lives in certain seasons to help us grow and mature. God has sent them for a reason; listen, and do as God teaches.

When we begin to obey God, the fog lifts on our priorities. When we read the Word of God, our vision improves. In a very short time we have no problem understanding the reason we were created and our purpose on earth.

Isaiah 43:19 shows us clearly, “For I am about to do something new. See, I have already begun! Do you not see it? I will make a pathway through the wilderness. I will create rivers in the dry wasteland.”

This Shaped by Faith Column appeared in the Messenger Inquirer on July 28th.